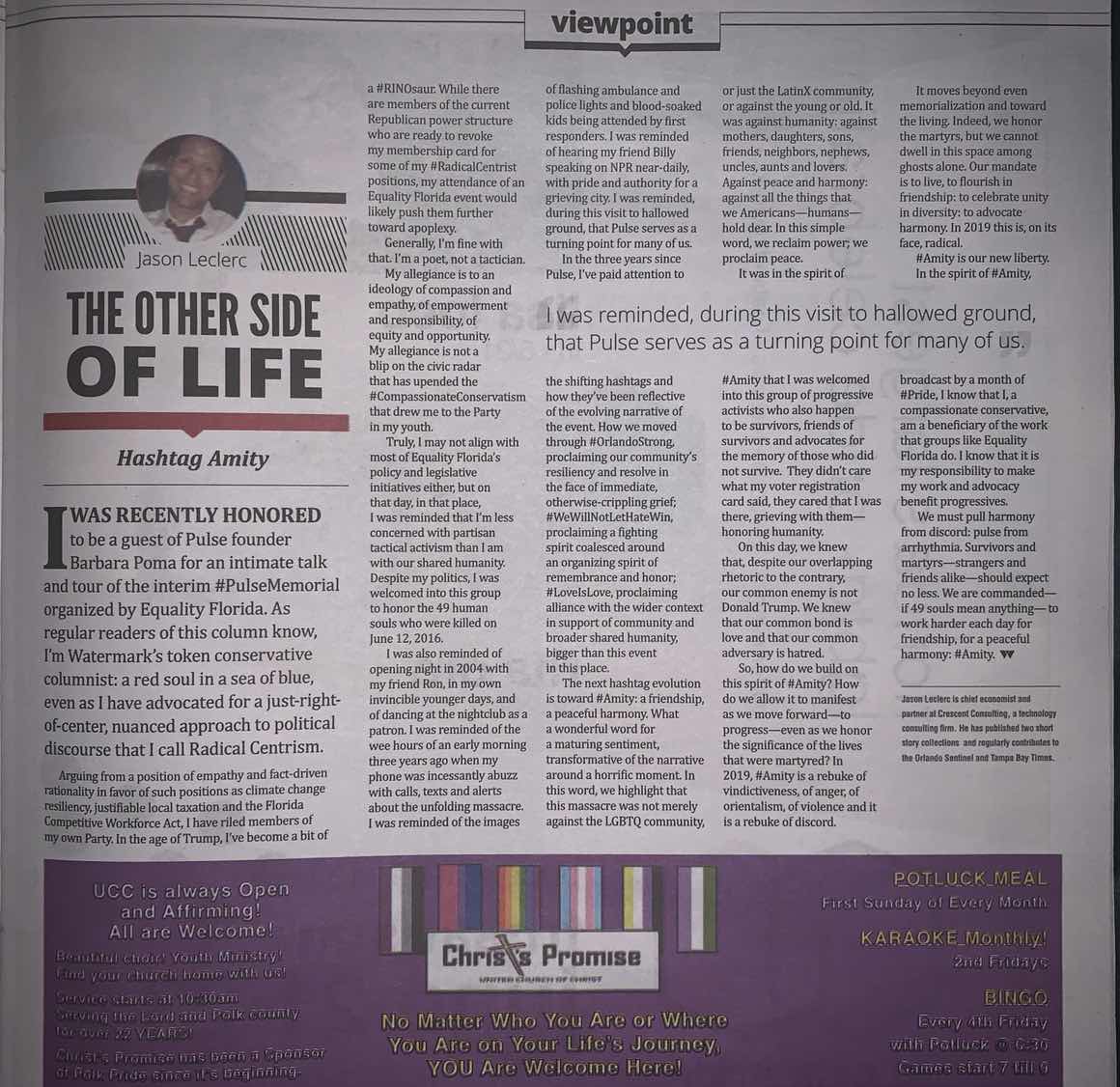 I was honored, recently, to be a guest of Pulse founder, Barbara Poma, at an intimate talk & tour organized by Equality Florida of the interim #PulseMemorial. As regular readers of this column know, I’m Watermark’s token conservative columnist: a red soul in a sea of blue, even as I have advocated for a just-right-of-center, nuanced approach to political discourse that I call Radical Centrism. Arguing from a position of empathy and fact-driven rationality  in favor of such positions as climate change resiliency, justifiable local taxation, and the Florida Competitive Workforce Act, I have riled members of my own Party. In the age of Trump, I’ve become a bit of a #RINOsaur. While there are members of the current Republican power structure who are ready to revoke my membership card for some of my #RadicalCentrist positions, my attendance of an Equality Florida event would likely push them further toward apoplexy.

Generally, I’m fine with that. I’m a poet, not a tactician.

My allegiance is to an ideology of compassion and empathy, of empowerment and responsibility, of equity and opportunity. My allegiance is not to a blip on the civic radar that has upended the #CompassionateConservatism that drew me to the Party in my youth.

Truly, I may not align with most of Equality Florida’s policy and legislative initiatives either, but on that day, in that place, I was reminded that I’m less concerned with partisan tactical activism than I am with  our shared humanity. Despite my politics, I was welcomed into this group of strangers-made-friends to honor the forty-nine human souls who were killed on June 12, 2016.

During the visit, I was also reminded of opening night in 2004 with my friend Ron, in my own invincible younger days, and of dancing at the nightclub as a patron. I was reminded of the wee hours of an early morning three years ago when my phone was incessantly abuzz with calls and texts and alerts about the unfolding massacre. I was reminded of the images of flashing ambulance and police lights and blood-soaked kids (at my age, they were all “kids”) being attended by first responders. I was reminded of hearing my friend, Billy, on NPR, speaking near-daily with pride and authority for a grieving city. I was reminded, during this visit to hallowed ground, that Pulse serves as a turning point for many of us.

I was reminded that there are times when ideological guerillaism is appropriate and times when it’s not.

In the three years since Pulse, I’ve paid attention to the shifting hashtags and how they’ve been reflective of the evolving narrative of the event. How we moved through #OrlandoStrong, proclaiming our community resiliency and resolve in the face of immediate, otherwise-crippling grief; #WeWillNotLetHateWin, proclaiming a fighting spirit coalesced around an organizing spirit of remembrance and honor; #LoveIsLove, proclaiming alliance with the wider context in support of community and broader shared humanity, bigger than this event in this place.

The next hashtag evolution, Ms. Parma shared, is toward #Amity: a friendship, a peaceful harmony. What a wonderful word for a maturing sentiment, transformative of the narrative around a horrific moment. In this word, we highlight that this massacre was not merely against the  LGBTQ community, or just the LatinX community, or against the young, or against the old. It was against humanity: against mothers and daughters and sons and friends and neighbors and nephews and uncles and aunts and lovers: against peace and harmony: against all the things that we Americans—humans—hold dear. And in this simple word, we reclaim power: we proclaim peace.

It was in the spirit of #Amity that I was welcomed into this group of progressive activists who also happen to be survivors and friends of survivors and advocates for the memory of those who did not survive.  They didn’t care what my voter registration card said, they cared that I was there, grieving with them—honoring humanity.

So, how do we build on this spirit of #Amity? How do we allow it to manifest as we move forward—to progress—even as we honor the significance of the lives that were martyred? In 2019, #Amity is a rebuke of vindictiveness. It is a rebuke of anger. It is a rebuke of orientalism. It is a rebuke of violence. It is a rebuke of discord. It moves beyond even memorialization and toward the living. Indeed, we honor the martyrs, but we cannot dwell in this space among ghosts alone. Our mandate is to live, to flourish in friendship: to celebrate unity in diversity: to advocate harmony. In 2019, as truly as in 1776 in an America that fought for freedom, this is, on its face, radical.

#Amity is our new liberty.

In the spirit of #Amity, broadcast by a month of #Pride, I know that I, a compassionate conservative, am a beneficiary of the work that groups like Equality Florida do. I know that it is my responsibility to make my work and advocacy benefit progressives.

We must pull harmony from discord: pulse from arrhythmia. Survivors and martyrs—strangers and friends alike—should expect no less. We are commanded—if forty-nine souls mean anything— to work harder each day for friendship, for a peaceful harmony: #Amity.