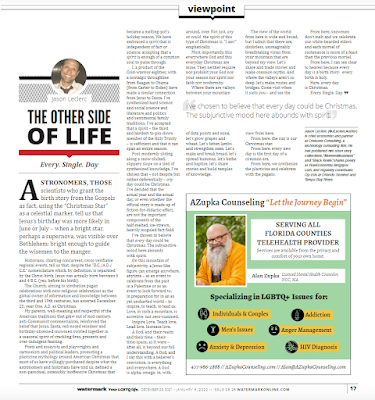 Astronomers, those scientists who grant the Birth story from the Gospels as fact, using the “Christmas Star” as a celestial marker, tell us that Jesus’s birthday was more likely in June or July, when a bright star—perhaps a supernova—was visible over Bethlehem: bright enough to guide the wisemen to the manger.

Historians, charting concurrent, cross-verifiable regional events, tell us that, despite the “BC/AD/CE” nomenclature which, by definition, is separated by the Christ-birth, Jesus was actually born between 6 and 4 BC (yes, before his birth).

The Church, aiming to synthesize pagan celebrations with new-religious celebrations as the global owner of information and knowledge between the third and nineteenth centuries, has asserted December 25, year One, AD as Christmas.

My parents, well-meaning and respectful of the American traditions that grew out of mid-century, anti-Communist commercialism, reinforced the belief that Jesus, Santa, red-nosed reindeer, and birthday-obsessed snowmen swirled together in a seasonal spirit of crackling fires, presents, and over-indulgent feasting.

Poets and essayists and playwrights and cartoonists and political leaders, promoting a plasticine mythology around American Christmas that most of us have willingly purchased despite what the astronomers and historians have told us, defined a non-parochial, ostensibly inoffensive Christmas that became a melting-pot’s holiday season. We have embraced a spirit that is independent of fact or science, accepting that a spirit is enough of a common soul to pulse through.

I, a product of the Cold-warrior eighties, with a nostalgic throughline from Reagan to Obama (from Carter to Biden) have made a similar connection from Jesus to Santa. I’ve synthesized hard science and social science and literature and politics and sentimental family traditions; I’ve accepted that a spirit—the third and hardest-to-pin-down member of the Holy Trinity—is sufficient and that it can span an entire season.

Postmodernly sliding along a snow-slicked, slippery slope on a sled of synthesized knowledge, I’ve chosen that—not despite but rather deferentially—any day could be Christmas. I’ve decided that the actual year and the actual day, or even whether the official story is made up of fiction-for-didactic-effect, are not the important components of the half-melted, ice-strewn, heavily moguled fact field.

I’ve chosen to believe that every day could be Christmas. The subjunctive mood here abounds with spirit.

On this mountain of subjectivity, a Jesus-like figure can emerge anywhere, anytime—as an event to celebrate from the past in a Palestine or as an event to look forward to, in preparation for in an as yet uncharted world—to inspire, to teach, to lead us. Love, in such a mountain, is accretive: not zero-summed.

A God, and their realm and their time—their time-space, as it were—after all, is beyond our full understanding. A God, and I say this with a believer’s conviction, is everything and everywhere: alpha, omega: in, with, around, over. Not just, any or could: the spirit of this type of Christmas is, “I am!” emphatically.

Most importantly, this everywhere God and this everyday Christmas are mine. They neither require nor prohibit your God nor your season nor spirit nor faith nor conformity. Where there are valleys between your mountain of data points and mine, let’s grow grapes and wheat. Let’s fatten lambs and strengthen oxen. Let’s make and break bread, let’s spread hummus, let’s bathe and baptize, let’s share stories and build temples of knowledge.

The view of the world from here is wide and broad, but I admit that there are, doubtless, unimaginably breathtaking vistas from your mountain that are beyond my view. Let’s share and trade stories and make common myths. And where the valleys aren’t so deep, let’s make routes and bridges. Come visit when it suits you, and see the view from here.

From here, the sun is our Christmas star.

From here, every new day is the first day of a common era.

From here, we synthesize the plasticine and celebrate with the pagans.

From here, snowmen don’t melt and we celebrate our white-bearded elders and each morsel of sustenance is more of a feast than the previous morsel.

From here, I can see clear to heaven because every day is a birth story:  every birth is holy.

Here, every day is Christmas. 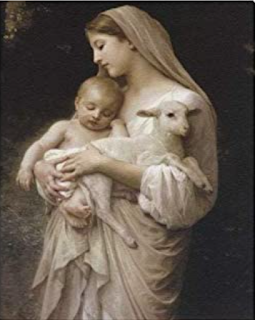