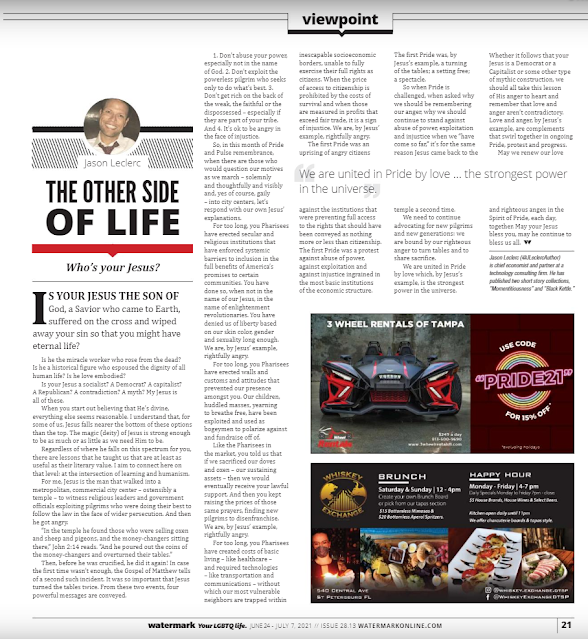 Read this essay as published in Watermark

Is your Jesus the son of God, a Savior who came to Earth, suffered on the cross, and wiped away your sin so that you might have eternal life in heaven?

Is your Jesus the miracle worker who healed lepers, rose the dead, and turned water into wine?

Is your Jesus a historical figure who espoused the dignity of all human life?

Is your Jesus the consort of men, fisherman of souls, builder of a social movement?

Is your Jesus an archetype of goodness? Love embodied?

Is your Jesus a socialist? A Democrat?

A capitalist? A Republican?

A contradiction? A myth?

My Jesus is all of these. When you start out believing that He’s divine, everything else seems reasonable.

I understand that, for some of us, Jesus falls nearer the bottom of these options than the top. The magic (deity) of Jesus is strong enough to be as much or as little as we need Him to be.

Regardless of where he falls on this spectrum for you, there are lessons that he taught us that are at  least as useful as their literary value. I aim to connect here on that level: at the intersection of learning and humanism. For me, that Jesus is the man that walked into a metropolitan, commercial city center—ostensibly a temple—to witness religious leaders and government officials exploiting pilgrims who were doing their best to follow the law in the face of wider persecution.

And then he got angry.

Then, three days before he was crucified, he did it again!

In case the first time, described in John (2) wasn’t enough, the Gospel of Matthew (21) tells of a second such incident. It was so important that Jesus turned the tables twice. From these two events, four powerful messages are conveyed:

2.      Don’t exploit the powerless pilgrim who seeks only to do what’s best for their family.

3.      Don’t get rich on the back of the weak, the faithful, or the dispossessed—especially if they are part of your tribe.

So, in this month of Pride and Pulse remembrance, when there are those who would question our motives as we march—solemnly and thoughtfully and visibly and, yes of course, gaily— into city centers, let’s respond with our own Jesus’ explanations:

For too long, you Pharisees have erected secular and religious institutions that have enforced systemic barriers to inclusion in the full benefits of America’s promises to certain communities. You have done so, when not in the name of our Jesus, in the name of enlightenment revolutionaries. You have denied us of liberty based on our skin color, our gender, and our sexuality long enough. We are , by Jesus’s example, rightfully angry.

For too long, you Pharisees have erected walls and customs and attitudes that prevented our presence amongst you. Our children, huddled masses, yearning to breathe free, have been exploited and used as bogeymen to polarize against and fundraise off of. Like the Pharisees in the market, you told us that if we sacrificed our doves and oxen—our sustaining assets—then we would eventually receive your support before the Law. And then you kept raising the prices of those same prayers, finding new pilgrims to disenfranchise. We are, by Jesus’s example, rightfully angry.

For too long, you Pharisees have created costs of basic living—like healthcare—and required technologies—like transportation and communications—without which our most vulnerable neighbors are trapped within inescapable socioeconomic borders and without which they cannot fully exercise their full rights as citizens. When the price of access to citizenship is prohibited by the costs of survival and when those are measured in profits that exceed fair trade, it is a sign of injustice. We are, by Jesus’s example, rightfully angry.

So when Pride is  challenged, when asked why we should be remembering our anger, why we should continue to stand against abuse of power, against exploitation, and against injustice when we, “have come so far,” it’s for the same reason Jesus came back to the temple a second time: we need to continue advocating for new pilgrims and new generations: we are bound by our righteous anger to turn tables and to share sacrifice.

Most importantly, we are United in Pride by love which, by Jesus’s example, is the strongest power in the universe. Whether it follows that your Jesus is a Democrat or a Capitalist or some other type of mythic construction, we should all take this lesson of His anger to heart and remember that love and anger aren’t contradictory. Love and anger, by Jesus’s example, are complements that swirl together in ongoing Pride, protest, and progress.

May we renew our love and righteous anger, in the Spirit of Pride, each day, together.

May your Jesus bless you, may he continue to bless us all. 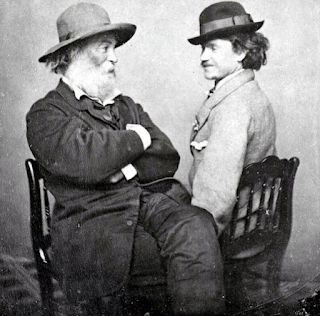