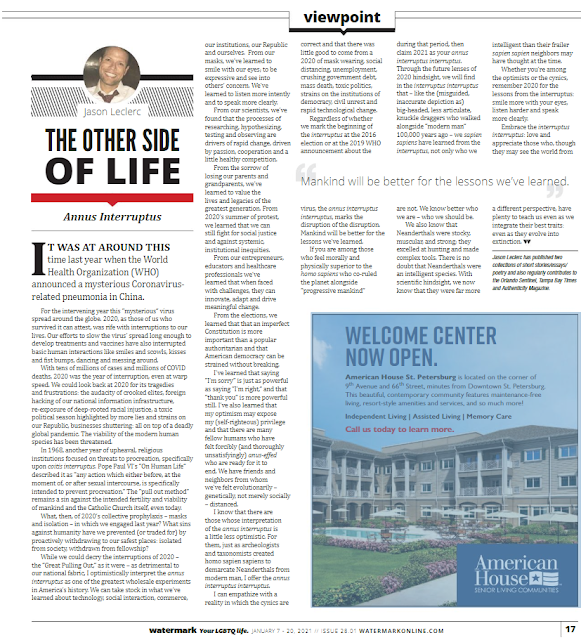 Read this essay as published at Watermark

It was at around this time last year, January 9, 2020, when  the World Health Organization announced a mysterious Coronavirus-related pneumonia in Wuhan, China. For the intervening year this “mysterious” virus spread around the globe along ancient trade and travel routes. 2020, as those of us who survived it can attest, was rife with interruptions to our lives and livelihoods. Our efforts to slow the spread of the disease long enough to develop treatments and vaccines have also interrupted basic human interactions like smiles and scowls, kisses and fist bumps, dancing, and messing around.

With tens of millions of cases and millions of Covid deaths, 2020 was the year of interruption, even at warp speed. We could look back at 2020 for its tragedies and frustrations: the audacity of crooked elites, foreign hacking of our national information infrastructure, re-exposure of deep-rooted racial injustice, a toxic political season highlighted by more lies, spitefulness, and strains on our Republic since the 1960s, businesses shuttering: all on top of a deadly global pandemic. The viability of the modern human species has been threatened.

In 1968, another year of upheaval that tested Americans’ viability, religious institutions focused on threats to procreation, specifically upon coitis interruptus. The Papal encyclical, On Human Life, describes as sinful, “any action which either before, at the moment of, or after sexual intercourse, is specifically intended to prevent procreation— whether as an end or as a means.” To the Catholic Church, even today, the “pull out method” is a sin against the intended fertility and viability of mankind—and of the Church. It is also among the most overlooked of the sins.

What, then, of the collective prophylaxis—masks and isolation—in which we engaged throughout 2020? What sins against humanity—death and misery—have we prevented (or traded for) by proactively withdrawing to our safest places: bunkered in our homes, isolated from civil society, withdrawn from fellowship?

While we could decry the interruptions of 2020—the “Great Pulling Out,” as it were—as detrimental to our national fabric, I optimistically interpret the annus interruptus as one of the greatest wholesale experiments in America’s history. As we trudge through the interregnum, we can take stock in what we’ve learned about technology, social interaction, commerce, our institutions, our Republic, and ourselves.

From our masks, we’ve learned to smile with our eyes, to be expressive and see into others’ concern. We’ve learned to listen harder and more intently, and to speak more clearly.

From our scientists, we’ve found that the iterative processes of observing, researching, hypothesizing, testing, and observing are drivers of rapid kinetic change and are driven by passion, cooperation and a little healthy competition. We also learned that these iterative processes are just as valuable when the expected results are disproven as when they are reified.

From the sorrow of losing our parents and grandparents, we’ve learned to value the lives and legacies of the Greatest Generation.

From the Summer of Protest, we learned that—while also fighting for life—we can still fight for social justice and against systemic, institutional inequities.

From our entrepreneurs, educators, and healthcare professionals we’ve learned that when faced with challenges, they can innovate, adapt, create new opportunities, redirect capital resources, and drive meaningful change throughout a fully integrated economy.

From the November elections, we learned that greater suffrage is better than less, that an imperfect Constitution is more important than a popular authoritarian, and that American democracy can be strained without breaking.

I’ve learned that saying “I’m sorry,” is just as powerful as saying, “I’m right,” and that, “Thank you,” is more powerful still.

I’ve also learned that my optimism may expose my (self-righteous) privilege and that there are many fellow humans who have felt forcibly (and thoroughly unsatisfyingly) anus-effed who are ready for it to end. We have friends and neighbors from whom we’ve felt evolutionarily—genetically, not merely socially— distanced.

I know that there are those whose interpretation of the annus interruptus is a little less rosy and optimistic. For them, just as archeologists and taxonomists created homo sapien sapiens to demarcate Neanderthals from modern man, I offer the annus interruptus interruptus. I can empathize with a reality in which the cynics are correct and that there was little good to come from a 2020 of mask wearing, social distancing, unemployment, crushing government debt, mass death, toxic politics, strains on the institutions of democracy, civil unrest, and rapid technological change.

If you are among those who feel morally and physically superior to the homo sapiens who co-ruled the planet alongside “progressive mankind” during that period, then claim 2021 as your annus interruptus interruptus. Through the future lenses of 2020 hindsight, we will find in the interruptus interruptus that—like the (misguided, inaccurate depiction as) big-headed, less articulate, knuckle draggers who walked alongside “modern man” one hundred thousand years ago—we sapien sapiens have learned from the interruptus, not only who we are not. We know better who we are—who we should be.

We also know that Neanderthals were stocky, muscular, and strong; they excelled at hunting and made complex stone tools suited to their time and geography. There is no doubt that Neanderthals were an intelligent species. We know now, with the benefit of scientific hindsight, that they were far more intelligent than their land-sharing more frail sapien sapien neighbors may have thought at the time.

Whether you’re among the optimists or the cynics, remember 2020 for the lessons from the interruptus: smile more with your eyes, listen harder, and speak more clearly. Embrace the interruptus interruptus: love and appreciate those who, though they may see the world from a different perspective, have plenty to teach us even as we integrate their best traits: even as they evolve into extinction.