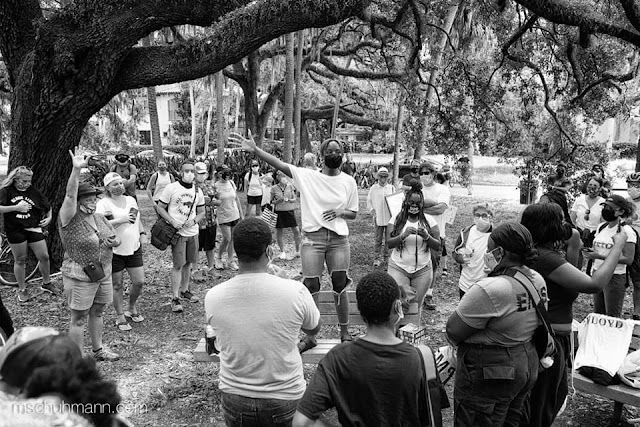 I mean it the way it's meant to be meant: this systemic wrong needs specific attention and I’m naming it. It’s not an exclusive assertion, it’s accretive: All these lives matter (implied, exclamation point) and so do Black Lives (explicitly, exclamation point): BLACK LIVES MATTER.
As part of our national, and local, dialogue, we need to give special attention to BLACK LIVES  as we take stock of what it means--and has meant--to be black in America: to have endured for 500 years on this continent as the underappreciated, under-respected, under-valued backbone of our culture, of our economy, of our dreams. BLACK LIVES, for all they've contributed to our nation, MATTER. And, yet, from our nation's inception, we've built barriers to their full realization. While we have chipped away at these barriers, there are remnants of systemic inequities that survive within our institutions. Although we have come leaps and bounds from three-fifths to emancipation to Thirteenth to civil rights to now, BLACK LIVES have "mattered"—have been right-valued—incrementally—evolutionarily—more.

By acknowledging solidarity with those shouting this phrase, I am not assigning value (relative to all other lives), but rather amplifying attention.
As Senator Tim Scott (SC-R) recently said, "...our nation’s arc always bends back towards fairness...We are not fully where we want to be, but I thank God almighty, we are not where we used to be."
WE ARE NOT FULLY WHERE WE SHOULD BE.
So, I agree that BLACK LIVES MATTER and that the broader Body Politick owes both a debt of gratitude and a debt of apology to a group of fellow citizens who've been systemically denied the full bounties of opportunity and hope that should be the birthright of every American--based on the institutions we've built around the amount of melanin in a neighbor's skin. While there are many of us who can say without compunction that we believe in our heart-of-hearts that everybody DESERVES equal opportunity, there are many of us who don't understand--cannot fathom from our insulated, white perspectives--that our wish for full equality and opportunity is yet-unrealized.
So, as conservatives, how do we approach this gap between what we want to believe is reality and what is actually reality? Answer: We err on the side of those whose full equality is yet-unrealized. We err on the side of empathy: what they feel and tell us they feel is true. It's our responsibility to believe our fellow citizens as they describe the daily inequities that they endure: fear of police, unfair prejudices in business dealings, cycles of institutional impediments to equal opportunity in education, politics, and finance. We err on the side of a true history as opposed to that we have white-washed to make ourselves feel better. Surely, we “bend toward fairness,” even as we don’t achieve it.
As conservatives, we recognize that there are challenges that--though neither we nor liberals have yet done so--we can solve within the rubrics of conservative principles. I shouldn’t need to explain to fellow conservatives what those principles are. What, apparently, I do need to convince my fellow conservatives of is that we do have an issue that needs to be addressed. We don’t need to pretend that systemic racism doesn’t exist. We don’t need to deny history. We don’t need to place blame on prior generations for not solving it completely. We should be content to continue working along the, “arc of history,” valuing our principles and the market and opportunity and equality and rule of law and ALSO opening our eyes to the gaps between where our principles do not yet meet reality.

Conservatives solve problems, but can’t do so without acknowledging the problem. Until we have reached perfection—the promised land—we should be working to right the enduring wrongs of history. There is nothing wrong—it is not an admission of guilt or conspiracy—with acknowledging that (accretively) BLACK LIVES MATTER.

With all that in mind, it is incumbent upon us, conservatives, to recognize that, indeed, BLACK LIVES MATTER, while also not purchasing the policy prescriptions that “Black Lives Matter”—the political movement—endorses. If we can’t embrace the sentiment, then we have removed ourselves from the discussion.

In the same way that we rally in favor of religious rights, gun rights, speech rights, economic rights, and (at its most basic, the right to rally, itself) we should respect and value others’ peaceful protests.

Our ideas are our currency, and we lose our idea-opponents’ interest when we never make a deposit to the discourse. There can be no return on our investment—incremental change for the better—if we deny the existence of the (banking, systemically unbalanced) system.

In our neighborhood, at this rally, there was no Antifa. There was no KKK. There were good people all around.

We brought them cold water, expressing our support for the process and for the sentiment, even if not for the full message. We welcomed them to our neighborhood. We thanked them for their bravery. We endorsed their rights to assemble and to speak with honesty.

Our neighborhood was not burned down. Traffic wasn’t even disrupted. The police and media left us to engage in civil discourse together.  We had, as far as institutions are concerned, a non-event. At the same time, we had a great event.

We bent an arc.

We, as true, ideological conservatives, are OPPONENTS of the opponents of progress. The Constitution we revere lays out and supports a framework for ever-advancing progress. We believe that BLACK LIVES MATTER even as we don’t agree with the politics of “Black Lives Matter.”  We know that America is the best chance we have in the world and in history to approach perfection even if we also know that perfection is not made for this Earth. We know that we can continue believing that, “...our nation’s arc always bends back towards fairness...We are not fully where we want to be, but I thank God almighty, we are not where we used to be."
Read more poetry, short stories, and essays at Momentitiousness.com
Email Post
Labels: African American Black Lives Matter Conservatism First Amendment protest Tampa Tim Scott